It took a long time, but I'm now pretty confident in my Japanese abilities. I throw around words like fluent; I maintain complicated conversations with other adults in Japanese.

That said, though, there are areas in which my Japanese ability is markedly lower than a native speaker.

They have all kinds of ridiculous formalities, rules, and outdated expressions when it comes to writing letters (or even very polite business emails) in Japanese. I should probably study them, but they're just... too... boring!

But there is a nerd for every flavor of obscure information, so if writing letters in Japanese is your thing, props to you. Power up a browser plugin like Rikaisama or Yomichan, visit a site like 手紙の書き方 (てがみ の かきかた // how to write letters), and eat your heart out.

The rest of us can gladly ignore the horrific process of writing letters in Japanese and do other stuff instead, like talk about action movies, spaceships, and the utter deliciousness of foods.

This sadistic test will not let you off so easily. It requires that we learn all kinds of grammar that, to put it bluntly, are useless... such as today's grammar point:

由 (よし) is an old, formal, written expression occasionally used in letters. It means something along the lines of "have heard that."

Although we do need to learn this grammar point in our N1 studies, since it feels like a waste of time to me, throughout the lesson I'll point out words and phrases that are worth memorizing for the long term (and not just for the test).

So keep reading. I'll do do my best to teach you some useful stuff.

Before we talk about 由 (よし), let's take a moment to acknowledge how formal this sentence is.

Now is also a good time to memorize the phrase お気の毒に (おきのどくに // my sympathies; my condolences). This is a lot like the "sorry" we use in English when saying "I'm sorry for your loss." The first time I heard it "in the wild" was in the Japanese dub of the first new Star Trek movie, when Spock's girlfriend was comforting him in the elevator after his mom died.

Long story short: Pretty much every word in that sentence except 由 (よし) is important to learn and understand.

How to Form Phrases with 由 (よし)

Just recklessly throw it into a letter after a word in plain form, or a noun followed by の. Then show it to your teacher. First, she'll google 由 (よし) because she isn't sure how to use it. Then she'll correct you. 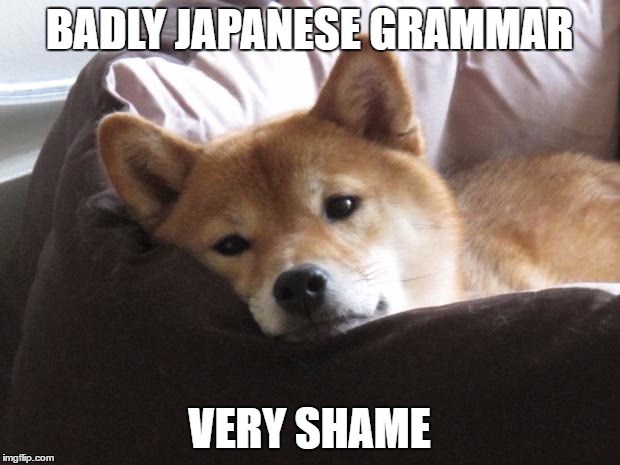 The year is 1978. Your best friend has moved to Mysterious Faraway Land. You read a news article about how there have been some military conflicts in that region. You run to your stationery set and write:

There is a lot of formal stuff and whatnot to look at in this sentence, too.

But forget that. Instead, let's look at two useful words from the sentence we'll use in any situation:

If you're living in Japan, undoubtedly someone will ask you why you came to Japan. You say something along the lines of, "Japan is a great country." This person then asks you:

Now you want to say that you like how it's safe. Your first instinct might be to say:

But next time, I encourage you try this response instead:

By the way, note the interesting usage of どこ, "where," in the question and ところ, "place," in the answer.

I like the word 不安 (ふあん) because it's one of the many words in Japanese that can form a sentence all by itself:

You're living in the US, and your 16-year-old Japanese nephew is coming to visit you this summer. You're explaining this to your Japanese friend (in the US), and that friend says something along the lines of: "He's traveling that far by himself when he's only sixteen? Will he be OK changing planes and whatnot?" You look at your friend seriously and say:

不安。
ふあん。
I'm worried about that.
Literally: "uneasy."
Note: That is, "I'm uneasy about whether X will be all right."

You are the one-word sentence master.

Let's look at our last two examples side by side:

Go ahead and memorize these as uber-polite ways of congratulations somebody:

Also note that なさる is the honorific form of する.

Also, if you read newspapers and boring financial blog posts, you'll see all kinds of things about 取締役 (とりしまりやく), which technically means something like "company director" or "board member." I see this word kind of a lot, actually... but I don't find myself using it much (or ever).

Learning political and business titles in Japan can be a pain because the organizations themselves tend to have unique hierarchies that don't translate well into English. I file all of these titles into a folder in my brain named "meaningless job title." Meaningless only to me, of course.

We made it to the end of the lessons!