We've covered all kinds of interesting topics in this course, but we still haven't delved into verbs much at all.

I think it's time.

Don't worry, though. We're easing into them nice and slowly.


The Dictionary Form of Verbs

Sometimes you'll see that I mention verbs in their "dictionary form."

This just means "verbs as they appear in the dictionary." That is, verbs that have not been conjugated.

For example, if you look up "eat" in an English-Japanese dictionary, you'll see an entry like this:

Here, 食べる is in its dictionary form — it's not conjugated. The verb changes when we want to, say, put it in past tense, 食べた (たべた // ate) or make a request, 食べて (たべて // eat). And we also have different conjugations for more polite language, such as 食べました (たべました // ate).

I'm not going to throw a bunch of conjugation charts at you just yet, though. Partly because I know that I personally have a hard time focusing on things like that. (It's so tempting to skim over!)

Instead, let's look at useful ways of saying things and pick up verb conjugations as we go.


Some good news: There's a multitude of things that we can say using verbs in Japanese without ever conjugating them.

You'll see what I mean in this lesson's example dialogues — all of them contain verbs in their dictionary form.

First, though, let's give a warm welcome to one of our verb stars, ある.

ある is a beast of a verb, and you'll have a hard time finding a minute of Japanese (at native speed) without it coming up at least once. It basically means "to be," though it can also mean "to have," among other things.

You should be able to guess this by now, but it's dictionary form is.... ある！

You will very rarely see kanji used for this word, but it is possible: 有る or 在る (ある // to be; to have; to be located in; etc.). 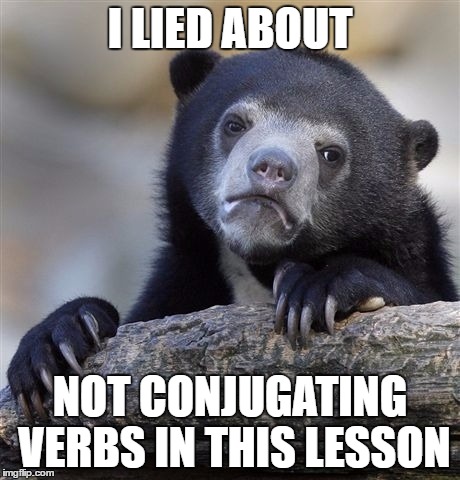 But I have a really good excuse.

See, the plain present negative form (i.e. "not VERB") of ある is ない, which we have seen before!

Hopefully you recall when we learned how to make negative i-adjectives. A refresher:

ない confuses me, so I'm not going to say that the ～ない in すごくない is the same as the ない meaning "not have" or "not be," but I think it's OK to let these get jumbled up in your head.

Anyway, a dictionary entry for ない would look like this:


Grammar nerds can look forward to pondering about whether ない is a verb or an adjective in certain sentences (or if it can ever be called a verb to begin with), but please don't bore the rest of us with lectures on it.

Oh, and note that you'll sometimes see the kanji used for ない, which would be 無い. Knowing when it's appropriate to use the kanji for this word is tricky, though, so I'd hold off trying until you feel pretty confident in how to do so. For the time being, just don't use the kanji when ～ない is at the end of an i-adjective or verb in its negative form (i.e. not all by itself).

OK. I'll make with the dialogues now. Doing so will probably explain ある and ない a lot better than I've been doing.

In this first dialogue we'll also see the dictionary form of する, "to do; to make; to [a million meanings]:"


A:
明日予定ある？
あした よてい ある？
Do you have any plans tomorrow?
Literally: “tomorrow + plans + have?”

B:
別に。ナミは？
べつに。 ナミ は？
Not really. How about you?
Literally: “not particularly. + Nami + は?”
Note: ナミ is Person A. Calling people by their names like this instead of saying "you" is common.


B:
偉いね。
えらい ね。
Impressive.
Literally: “admirable / impressive / great + ね.”
Note: The word 偉い is very difficult to translate. It's a bit like saying "good for you..." only it sounds like you are genuinely impressed and praising the listener for being great somehow (e.g. by studying a lot).


Some fun stuff to note:

- In the sentences above that have verbs, the verb is always coming at the end of the clause.

- The plain present tense of verbs (which are conjugated the same as dictionary form verbs [i.e. not conjugated]) can also be used to denote future actions (e.g. "I'm gonna study" for 勉強する).


In B's response, we don't have to explicitly say "I" or "money" because these are obvious from context.

A:
明日予定ある？
あした よてい ある？
Do you have any plans tomorrow?
Literally: “tomorrow + plans + have?”


There will come a day when I explain all the particles being dropped from these casual sentences. 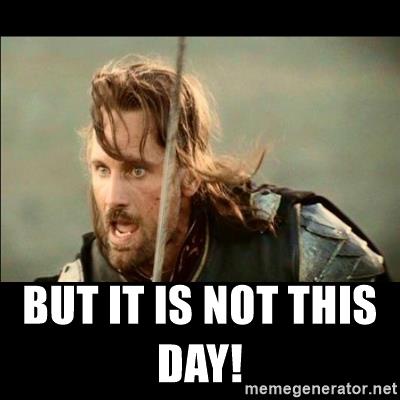 We'll get plenty of particle practice, after all, when we look at polite language.

Speaking of which, note that all of the sentences in this lesson are casual.

The easiest way to start using verbs without worrying about conjugating them is to make casual questions meaning "Are you going to VERB?" or "Do you want to VERB?"

If you want to see lots of examples of such questions, go back to this classic NDL.

In the next lesson, we'll look at different verb types. *_*