It took me years of trial and error before I realized which tools were the right tools for me to learn Japanese as quickly as possible.

I've taken quite a few Japanese classes over the years, and every single one focuses on four things: listening, speaking, reading, and writing. This makes sense. That's what it means to be totally fluent in a language, right? You can understand it, speak it, read it, and write it. There's one gigantic problem with this, though: The definition of fluency is not a method for attaining fluency.

That stuff works eventually. It is studying, after all. But it is so, so, so slow.

We want to learn Japanese fast.

And to learn any language fast, you only need to focus on two things:

My goal is always to improve my skill in these two areas using time-efficient methods applied consistently over an extended length of time. If your study methods are relevant to your level and goals, time-efficient, and you study consistently, then you are guaranteed to improve.

So let's do those two things.

Ultimately, I'd rather not spend too much time or space about theory, however, as this is meant to be a practical guide.

Coming back to the United States, people think that I'm fluent in Japanese because I lived in Japan. That's simply not true, though.

“I always say that the only way to learn a language is to just go live in the country where they speak it. Just get thrown in there, and you'll pick it up in no time." – Person who speaks no foreign languages.

For me personally, I don't like focusing on speaking or writing much in the preliminary stages of learning a language (although I will introduce you to the tools necessary to do so). Yes, writing and speaking are absolutely essential skills, and you will have to learn them. But they are not a productive use of time until you have solid vocab, grammar, and listening skills.

On the other hand, I do have friends that focused primarily on speaking from the start who are very good at speaking Japanese, so that too is a viable method. Later on in this guide, I'll list resources and sites that give advice on this sort of study approach. 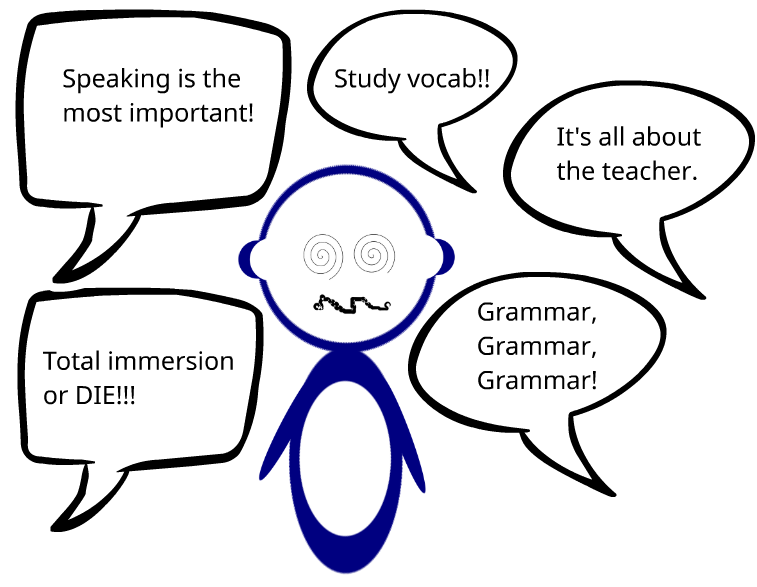 The point is, don't try do follow advice that you don't want to follow. Obviously I believe that the guidance in this book is sound and effective, but it would be naïve of me to claim that it's for everyone. Instead, I ask that you take a nice, long look at my study system. Just try it out. See how it feels. Like a couch at a furniture store.

I will provide you with alternative study tools and tips pretty much every step of the way. This is your study journey, so it's up to you which path you will take.

If you want to take my recommended path, though, then we're looking at a study system characterized by 4 Phases and 1 Underlying Principle.

Here's a visual breakdown of what we cover in the Hacking Japanese Supercourse: 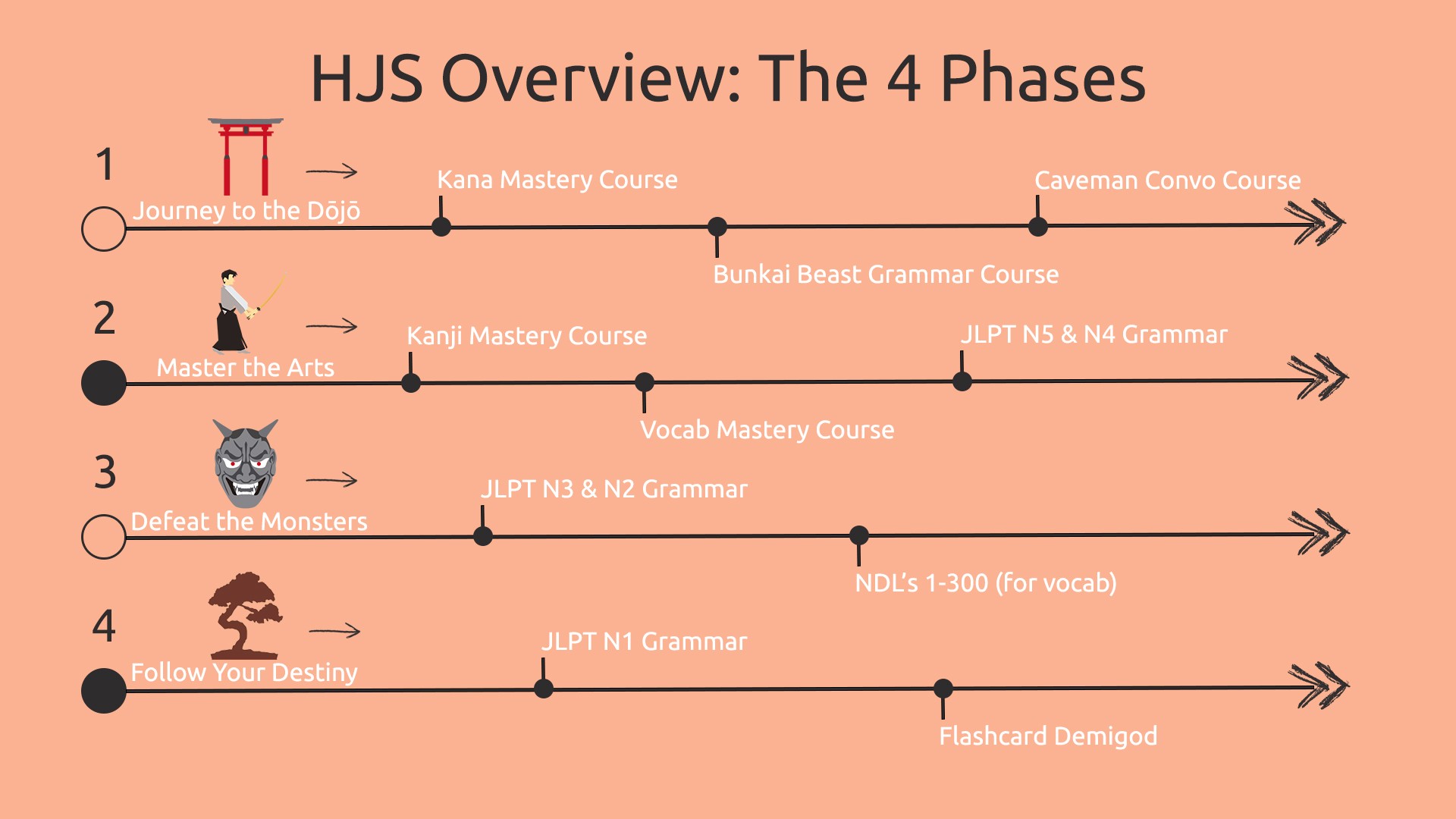 Phase 1 - Journey to the Dōjō

We'll start out with a wild sprint to attain motivating, meaningful progress in our studies.

When most of us start learning a new language, motivation is high, so we are more inclined to put in several hours of studying per day... or at least as much as is feasible given our various other time commitments.

By the time you have finished Phase 1, you will have learned:

This phase will take quite a bit longer than the first one. Having reached the metaphorical dōjō, you are ready to grind on some Japanese skills. This is the montage where "Eye of the Tiger" plays and you undergo all the arduous training regimens that your seemingly callous sensei assigns to you. Sadly, life not being a montage, this will take more than a few minutes. More than a few months, in fact.

Specifically, upon finishing Phase 2, you will have learned:

By now, you're getting pretty good at Japanese. You can manage basic conversations. You're picking up words right and left when you watch Japanese shows.

But it's not enough. Not nearly enough. You still fail to recognize a ton of words. You keep forgetting kanji. There are still a lot of grammar constructions to master if you want to call yourself "fluent." Thus, you need to slay these monsters: Vocabulary (including kanji and how they are used in vocabulary) & Grammar.

Once you're done with Phase 3, you'll have learned:

Once you reach this phase, you won't need help from the Hacking Japanese Supercourse all that much. Having mastered everything needed for the JLPT N2 test (in addition to having mastered the massive amounts of things the tests neglect to teach), you will be qualified to work in a Japanese-speaking environment, enter some Japanese schools, etc. You'll also find that you can follow most media quite well, though not perfectly.

At this point, you can continue using our materials to master JLPT N1 grammar, qualifying you to become a professional translator. We also have a course on creative ways to build your own custom study content so that you can enjoy content that interests you, such as anime, manga, video games, TV dramas, light novels — whatever it is that's attracting you to Japanese culture.

Most importantly, if you reach Phase 4, you will be good enough at Japanese that you don't need to worry about forgetting Japanese ever again.

At this level, you can enjoy content in Japanese. This means that you can expose yourself to massive amounts of Japanese content without feeling exhausted. In turn, that means that "studying" for 20 hours while you binge-watch or binge-read a manga is a productive activity. Spending 6-8 hours hanging out with Japanese people on your day off doesn't melt your brain.

There is only one principle to this Japanese Mastery Plan:

Don't get me wrong. You can have a life. You can learn other things. But you cannot go a single day without studying Japanese at least a little bit.

Details on ways to ensure that you can stick to this study plan will be introduced in the following section. Then we'll dive into phase-specific content.

Swim, swim, swim. You are crossing an ocean.