I remember this one time, back in 2013--I had just moved to Japan (for the second time), and I was out to dinner with some new friends.

We were all speaking Japanese, having a good time, and enjoying the bright lights of Shinjuku.

And later that night, one of the girls, who I think was more than a little tipsy, smiled and said:

"Your Japanese is so cute. You sound like a little boy."

Needless to say, I was less pleased with my sounding like a little boy than she was. Partly because most little boys I've spoken to in Japan talk a lot like their mothers.

But, oh well. Just one more step in my journey to high-level proficiency.

As a student, I searched high and low for anything explaining differences between male and female speech and for natural, casual phrases.

Most searches led nowhere... which is why I talked like a little boy a few years ago, I suppose.

Luckily, you can learn from my mistakes.

Today I'd like to point out just a couple of gender differences in Japanese.

In explaining these differences, I'll be mentioning a couple of anime that I have Anki flashcards for--Sword Art Online 2, Charlotte, Trinity Seven, and Place Promised in Our Early Days. With the exception of that last one, I've never actually seen these anime; I just have flashcards for them ^_^. Sadly, I can't post these decks on my site, as I'm afraid of getting sued for copyright purposes. That said, you might find a friend or two willing to share cool stuff on the community page (signup link).

Starting a sentence with なぁ 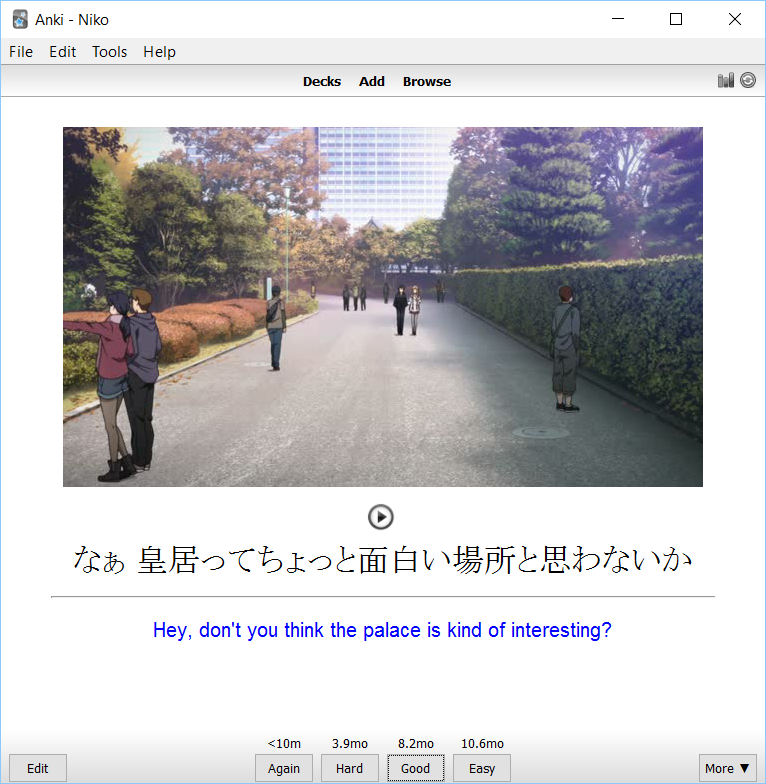 This なぁ at the beginning of the sentence sounds quite masculine to me. You're more likely to hear a girl say ねー than なー. In both cases, the word is used much like we use "Hey" or "So" in English when starting a new conversation. 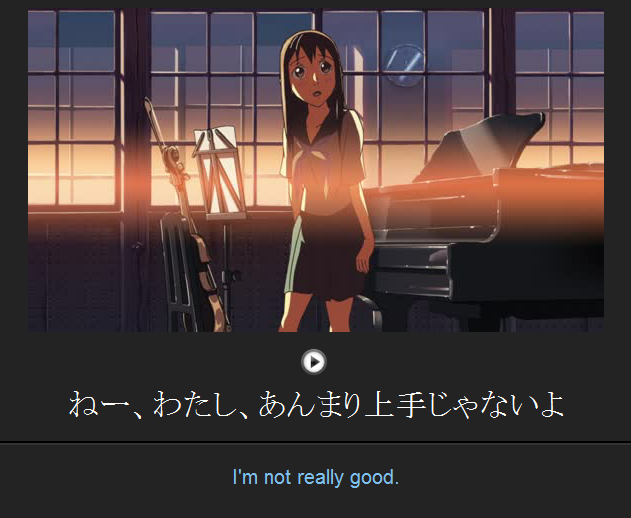 These first two examples have a flat pronunciation, right? The ねぇ and なぁ do not go up and down in intonation. 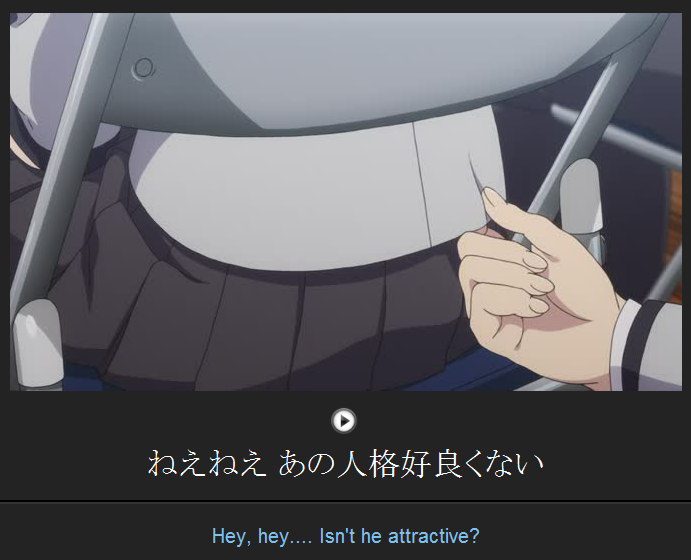 Being blunt and rude is... masculine?

I'm a bit disappointed to say that, the more I learned about what constitutes "masculine" speech in Japanese, the less I wanted to speak it. Generally speaking, "male speech" tends to be rough, assertive, and in many cases, downright rude.

To me it sounds a bit uncouth.

But he could have just left out the か and said:

We saw how the usage of か can be a bit rude wayyyyyy back in Lesson #5.

And you'll notice that in Lesson #5, every example sentence has a male speaker, because this somewhat rough question formation is highly masculine. I know it's natural, but I rarely use it. I don't care if I sound masculine anymore. I mean, I don't want to sound feminine, of course. But that's a bit different. Being well-spoken is so much cooler than being "manly," isn't it?

Also--and perhaps this is the real reason I shy away from this language--it is often difficult to use masculine phrases without sounding a bit rude... which is why I'll only use it with Rei and very, very close friends. This is also why it doesn't show up in your textbooks or get taught by teachers.

Anyways, I'm getting sidetracked. I brought this up because I want to talk about another blunt way of asking questions: Ending sentences with だ？ 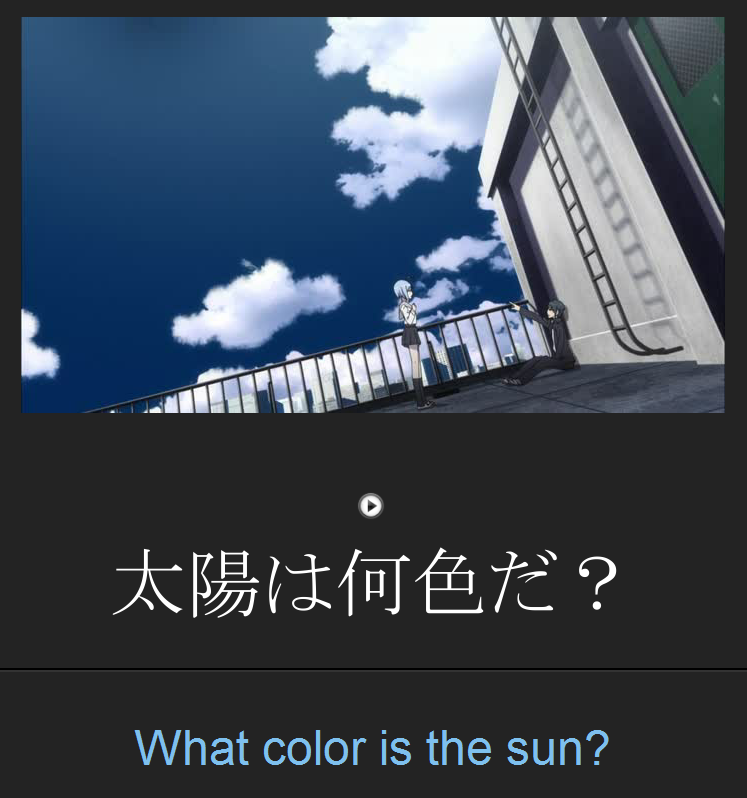 This is a really strange question to be asking, right? (Welcome to anime.)

Let's look at a different one: 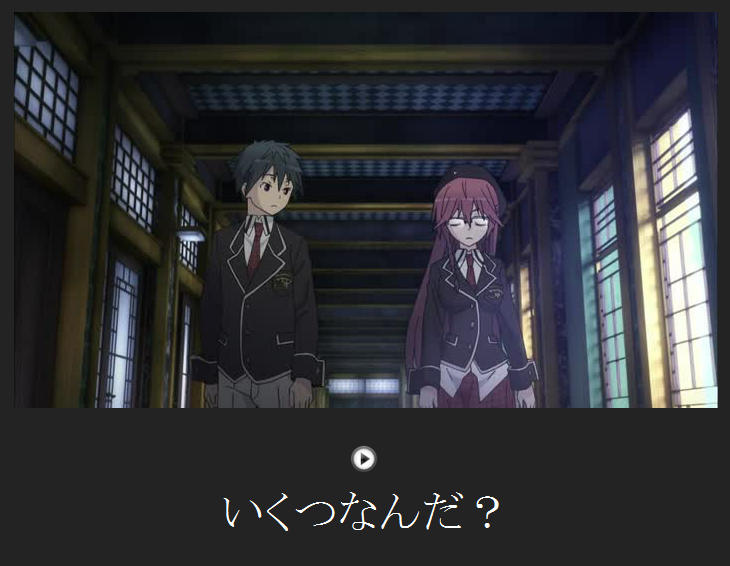 So what's a less blunt way to ask this question? Well, we could just say...

いくつ？
How old are you?
Literally: "how many？"

Using the なの？ at the end makes the speaker sound a bit more intrigued/interested.

The point I want to make here is that asking a question with だ？ is both masculine and a little rude. Much ruder than, say, the girl's reply to this question... 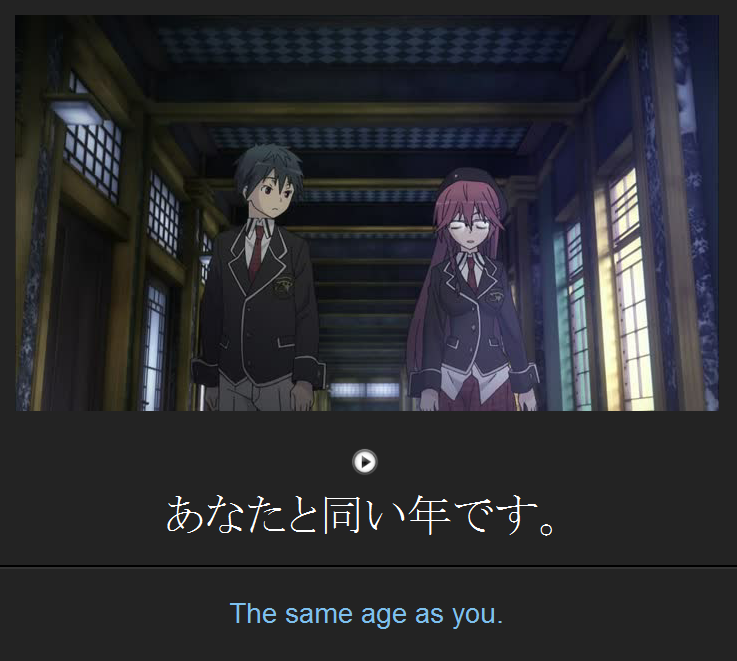 あなたと同い年です。
あなた と おないどし です。
The same age as you.
Literally: "you + with + same age + is."
Note: Although she is speaking "polite" language, as is shown by the です, her language is still quite cold and distant. Part of this comes across in the fact that she calls him あなた even though she knows his name. I still haven't quite mastered nuances as well as this girl T_T.

After their conversation continues for a bit, she even comes out and tells him: 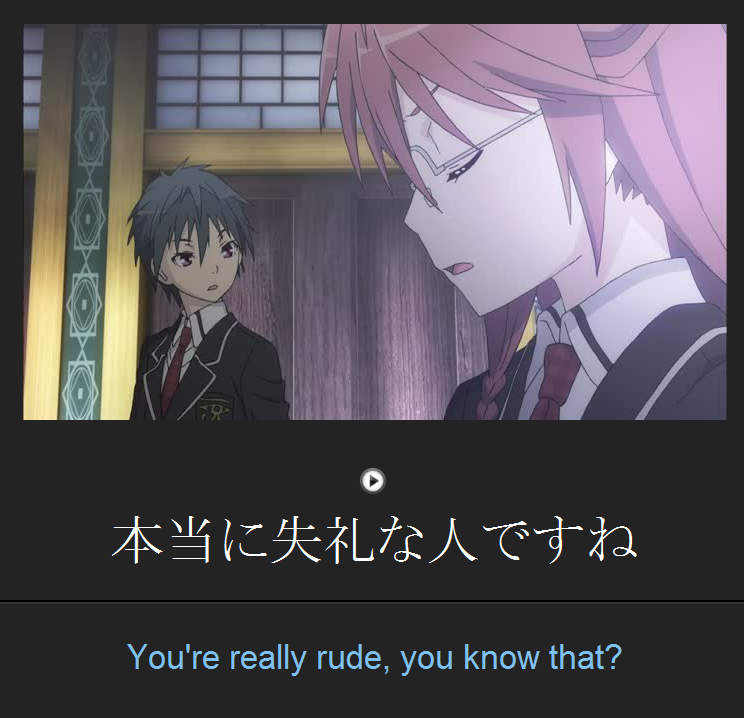 Here is a brief overview, including a couple of things I didn't have space for in this lesson...

Feminine Language
- Using alternating intonation, particularly with the particle ねえ or ね～.
- Ending a statement (i.e. NOT a question) with の or なの.
- Starting a sentence with ねえねえ or ねーねー.

*Please keep in mind that, though these distinctions are typical for gender differences, they are not absolute rules. I have heard many girls use "masculine language" when chatting with friends and/or family. That said, you will rarely hear men using the "feminine language" listed above.

Bonus Tip: If a girl ends a statement (i.e. NOT a question) with なの, a guy can probably end that same statement with なんだ instead.

Anyways, good luck! Don't let it get you down if someone makes fun of your little-boy Japanese. ^^