Don’t freak out, but I’ve actually already given you all of the tools that you need to reach a seriously powerful level of Japanese.

Easier said than done, though, right? As such, I think it might help to look at some mental prep, as well.

Preparing yourself for a lot of failures.

Doing anything great means failing again and again. You will probably fail to stick to studying Japanese. I know I did. And maybe you’re expecting me to say, but get up! Push through. Fight-O. Or some other BS about being disciplined. Personally, that kind of stuff just makes me want to quit more. I don’t think that life should be a struggle. And studying shouldn’t be a struggle, either.

When dealing with disappointments, failures, and setbacks, I don’t want to have to turn into a superhuman life coach. Instead, I’d rather take a step back, reflect on my expectations, why they were wrong, and search for a pleasant way I can change that in the future.

I want to share a really great article with you. It’s by Leo Babauta, from Zen Habits. For me, he’s by far the best when it comes to motivation, discipline, habits, and all that good stuff. Here you are, homies… “What I Do When I Fail.”

So a few years ago, I came across this really awesome book:

In the book, Dweck talks about the mindsets that people have as they approach learning, work, relationships, and, well, life in general. The really interesting thing is that she divides peoples mindsets into two categories: (1) fixed mindsets and (2) growth mindsets.

Dweck puts it this way:

In a growth mindset, people believe that their most basic abilities can be developed through dedication and hard work—brains and talent are just the starting point. This view creates a love of learning and a resilience that is essential for great accomplishment.

Virtually all great people have had these qualities.

Teaching a growth mindset creates motivation and productivity in the worlds of business, education, and sports. It enhances relationships. When you read Mindset, you’ll see how.

Here’s a really awesome graphic that illustrates the two: 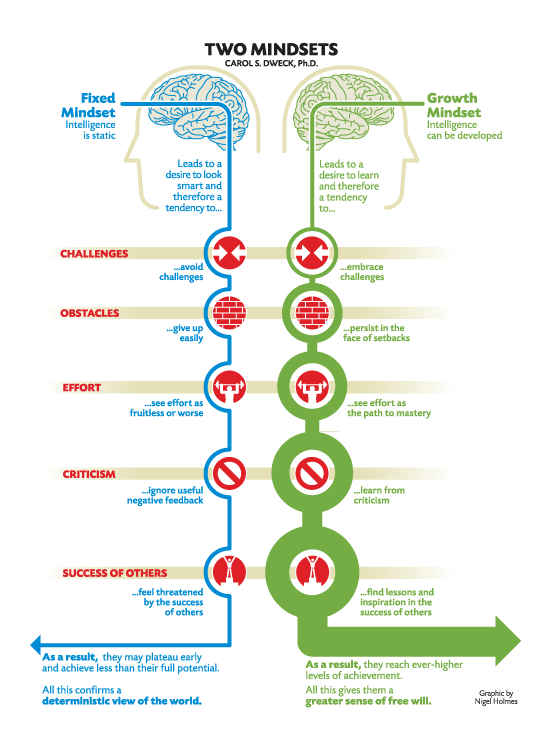 Reading about Dweck’s two types of mindsets, it was really easy for me to imagine people I know—loved ones in my life that fall into one of these two categories. Some of them have a fixed mindset. Some of them have a growth mindset. And in thinking about those people, I noticed that the ones I respect the most always seem to have a growth mindset.

I think it goes without saying, but to learn Japanese, you’re probably going to want to have a growth mindset. Talent might be something that people acquire naturally, but skill only comes from hard work. And, lucky for us, Japanese is a skill. So we can learn it, make it ours.

Anyways, assuming you have that growth mindset, you know that it is theoretically possible for you to master Japanese if you really go for it.

When we do fail, we can give ourselves the Failure Review Interview. It is essentially just a list of questions that you can ask yourself when you run into trouble sticking to your studies, reaching your goals, and all that stressful business.

Try going to a cafe or a library. Maybe put on some relaxing music. Then pull out a pen and paper and seriously attempt to answer each of these questions. If you don't understand the root of what's causing your failures, after all, you will be doomed to repeat them.

Also, going to cafes and writing stuff in notebooks is fun. ^_^

To recap the course so far…

Only one more lesson! Oh how far we have come…